In the hyper-competitive pickup truck market, “more” is often synonymous with “better”: more horsepower, more payload, more towing capacity, more space. Design-wise, “more” also has come to mean “bigger” because, simply, scaling up is much easier than trying to pull off a system redesign based on improved efficiency—especially when the vast majority of customers don’t mind bigger pickups at all (other, maybe, than when trying to park in town).

But for some specialty work truck applications, the increase in base-vehicle size is increasingly problematic for upfitters.

“Obviously, in the high-performance off-road world, you’re always looking to accomplish more with less—and bigger just doesn’t off-road very well,” Bill Davidson, vice president of sales with Skeeter, told TBB. “Every time you come up with a bigger chassis, its performance off-road is limited and its cost is increased.”

So the engineering team at Skeeter went back to the drafting table and began to evaluate options for taking “very capable” smaller chassis and upfitting them with, and only with, the components and equipment needed for the application.

The benefits of a package based on a Class 5 truck compared to a Class 6 or 7 are significant, Davidson explained: Better off-road performance, easier to drive—especially as more and more firefighters are coming in with little or no commercial vehicle driving experience—and reduced cost.

In fire management terms, Skeeter wanted to build a vehicle to meet Type 3 standards (typically based on a Freightliner M2 or an International HX) with a typical Type 6 chassis (medium-duty pickups) that could “go places that those big trucks could only dream of going.”

The Skeeter F-550 6X6 was developed during the early foray in sub-23,000-lbs. class, designed specifically for fire departments that needed very low ground pressure vehicles. And other Skeeter Class 5 platforms have performed well, validating the lower-GVW concept—but they have just not quite met the company’s very high expectations.

“We had been asked many times to develop an upgraded drivetrain system for the Class 5 marketplace, and the dominant player was the F-550 from Ford,” David Damian, senior director, Defense, at Meritor, said. “So in 2017 Meritor acquired Fabco [which manufactured parts for medium, heavy and extra heavy vehicles for on- and off-highway applications] and all of a sudden it made sense to go ahead with developing this new version of the 3000 Series, specifically targeting the Class 5 market.

“Essentially, the plan was to leverage a bunch of subsystems that we already had in production and combine them all together for one product that we could launch into that marketplace.” 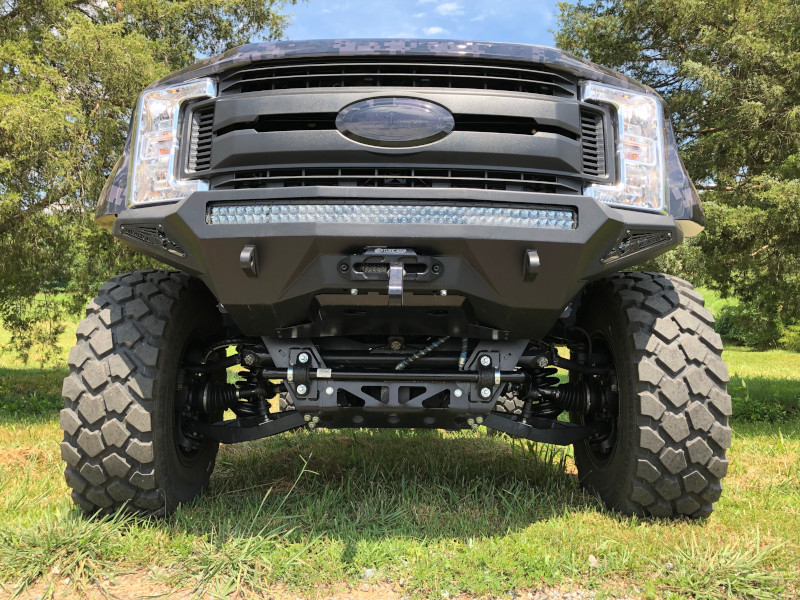 The ProTec line was developed in a redesign of the Meritor independent suspension model range 15 years ago, and got its start in military applications. The 3000 Series became Meritor’s primary offering for the Joint Light Tactical Vehicle (JLTV), which is the replacement for the Humvee for the US military. So the technology is truly battle tested on more than 150,000 tactical vehicles in the US military fleet and with the associated millions of in-theater miles, Damian explained.

The resulting upgrade is designed specifically for the Ford F-550 to provide increased durability, capacity and functionality over stock performance for applications such as Border Patrol, First Response, Police, Severe Service and off-road upfitting.

The F-550 was selected because it presented a “very broad platform” that maintained nearly a two-thirds market share, and was used in various vocations ranging from standard work trucks to Meritor’s initial target market: commercial off-road armored vehicles, Damian added.

“We found that upfitters were overloading the trucks with the armored caps that they would put on them,” Damian said. “They needed a front axle that could carry increased weight and there was also a desire for increased mobility, which our axle provides through integration of a larger tire and a central tire inflation system (CTIS), as well as automatic locking differentials that can go from a wide-open differential to a full-lock differential to help increase your mobility off road.”

Following the design phase of the project, Meritor bought its own F-550s for installation and testing, identifying additional components that would be needed for various configurations. Currently in the initial phase of the launch, Damian reports more than a dozen axles are now in the hands of upfitters—including Skeeter Brush trucks—who are doing their own installation and testing.

A selling point is the modular nature of the ProTec unit, Damian suggested.

While Skeeter has a uniquely capable testing program, Meritor does provide integration assistance to upfitters who need it, with a team that will do ride tuning and evaluation to ensure optimal performance of the components and the system, Damian noted.

Skeeter has fire-equipment roots that go back more than a century in Texas to an original shop next to the Alamo. The company’s current incarnation began with its 2009 sale and integration into the Siddons-Martin Emergency Group, for whom Skeeter now provides a presence in the wildland commercial vehicle segment. Davidson estimates Skeeter has built about 600 trucks in the past five years, making the company “the dominant player” in the very specialized lifted-and-modified emergency vehicle space.

Skeeter’s success is based on its “high performance engineering” capabilities and fire-fighting expertise, taking chassis that are commercially readily available and easily serviced then upfitting them for work in “aggressive off-road environments,” he suggested.

Skeeter Brush Trucks, based in a 12,000 sq. ft. facility in Hillsboro between the DFW Metroplex and Waco, currently employs about 60 people.

To upfit the Class 5 trucks for greater capability in the field, Skeeter orders the factory unit “as heavy as we can,” Davidson explained.

“We’ll order some weird packages, like the snowplow package which gives us a little bit bigger alternator gives, us a bigger GVW spring rate,” he said. “We don’t need all of that. We take off the springs, we take off the drive line—all of that gets redone. But it does allow the GVW on the sticker to be higher than if we just ordered a cheap chassis like a lot of manufacturers do. Sure, if you’re just going to replace the springs, why would you put a 7,500-lbs. front axle upgrade when you could get away with 6,000 lbs.? Sure, you’ll save 800 bucks.

“But with a winch, and a monitor, and sweeps and armor plating, you don’t have any reserve [weight capacity]. It’s the liability issue. The truck GVW has to match what the engineering is on it.” 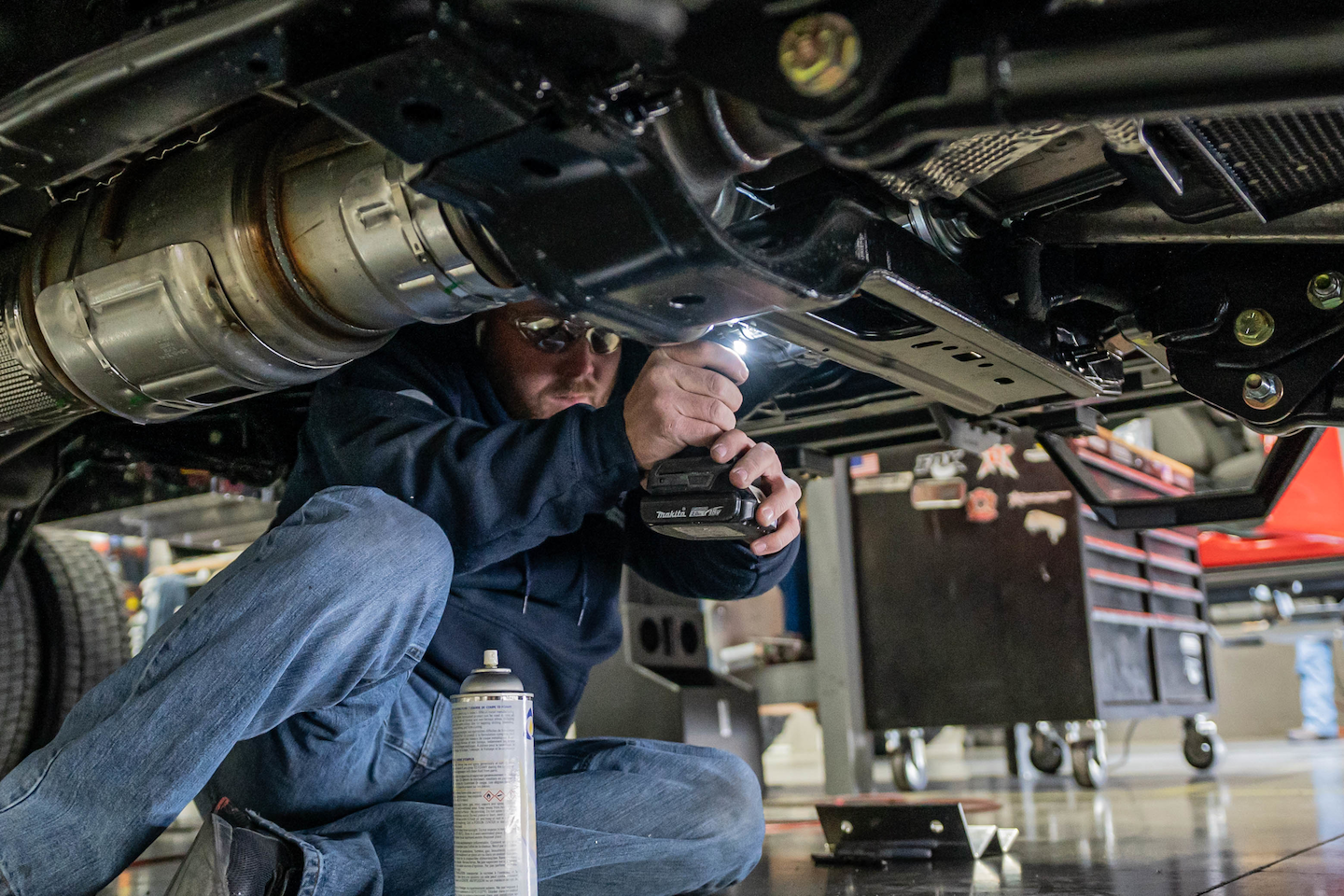 Additionally, Skeeter removes the OEM suspension, replacing it with their own coilover front springs and shocks, along with a remote nitrogen reservoir—a durable, high performance system designed for Baja race trucks. Skeeter also replaces the standard radius arm with a four-link suspension. The enables caster and camber to remain within OEM spec throughout the motion cycle, Davidson noted.

“That’s the biggest single contributing factor to the fact that our trucks handle better than OEMs,” he said, adding that people are especially impressed because they expect the truck to ride like a brother-in-law’s lifted pickup. “If you can manage to convert to a system that will allow you to stay in OEM spec, that gives you a great riding vehicle, very predictable on road and off road, and it allows your less-experienced drivers to put the truck into maneuvers that might normally be a little challenging for them.”

The Skeeter truck with the Meritor upgrade is a “long-term” development project, Davidson noted. In addition to more convenient proving grounds in Texas, the truck will get some high-altitude miles in Colorado and might put in some collaborative time with Meritor representatives at the Nevada Automotive Test Center (NATC) later this year.

Testing is an iterative process. Currently, the Skeeter team is testing drive lines on the front axle, a challenge because the flange sizes “are kind of in a gray area” and parts availability is a problem, Davidson explained.

“It’s got so many different packages that come on it—the diff locks, CTIS, the bigger brakes—we want to make sure that when this comes out we’ve done diligence, and that the ABS sensors are upgraded properly to read wheel speed lock-up in all different conditions,” he said. “That requires testing from the desert to asphalt to wet to rocks to snow—and those don’t all happen in the same location.”

“That is the biggest issue facing us right now on new trucks. The technology that Ford and other OEMs have put in there is great for a non-modified stock truck that goes into generic service,” Daivdson said. “But it doesn’t work for any of the manufacturers that are on the edge [of the market] and need to modify the trucks in any way: tow truck manufacturers, overland adventure companies with expedition trucks, oil rig companies and drill trucks, and there’s us in the wildland world.”

Simply, upfitters don’t have the kind of access they need to the technology; indeed, it’s designed to keep people out.

“We actually we have some resources from Ford from our previous projects. We’ve reached out to them and they’ve been pretty good about trying to work with us, but the problem is that it has to be an across-the-board fix that works with the tow-truck guys and the ambulance guys,” he said.

Whereas previously an electronic control module might “throw a code” if a modification led to a sensor parameter going outside of its limit, the operator “would just live with it” because the vehicle could continue to function fully. More modern vehicles, however, will reset to a base mode and deactivate a performance function such as stability control, Davidson suggested.

“It’s definitely an integrated package, and our company excels because were engineering based—that’s our backbone,” he said. “But it’s just getting to the point where the guys that designed the system can’t even give us the answers on some things because they never really thought about this or that happening and didn’t take it into equation.

“They come from the perspective, for example, that if you have a bucket truck you’ve got a torque box, you’ve got a lift arm you’ve got hydraulics, and a lot of that’s above the CG [center of gravity] raising the overall finished package height of the truck—but your tires are stock and the system is generic enough that it can handle that. But when you change the tires and change the revolution of the axle ends when you go around the corner, the system runs into a problem trying to maintain the calibration between wheel speed sensors and what the ECM for that specific component thinks is in the norm. 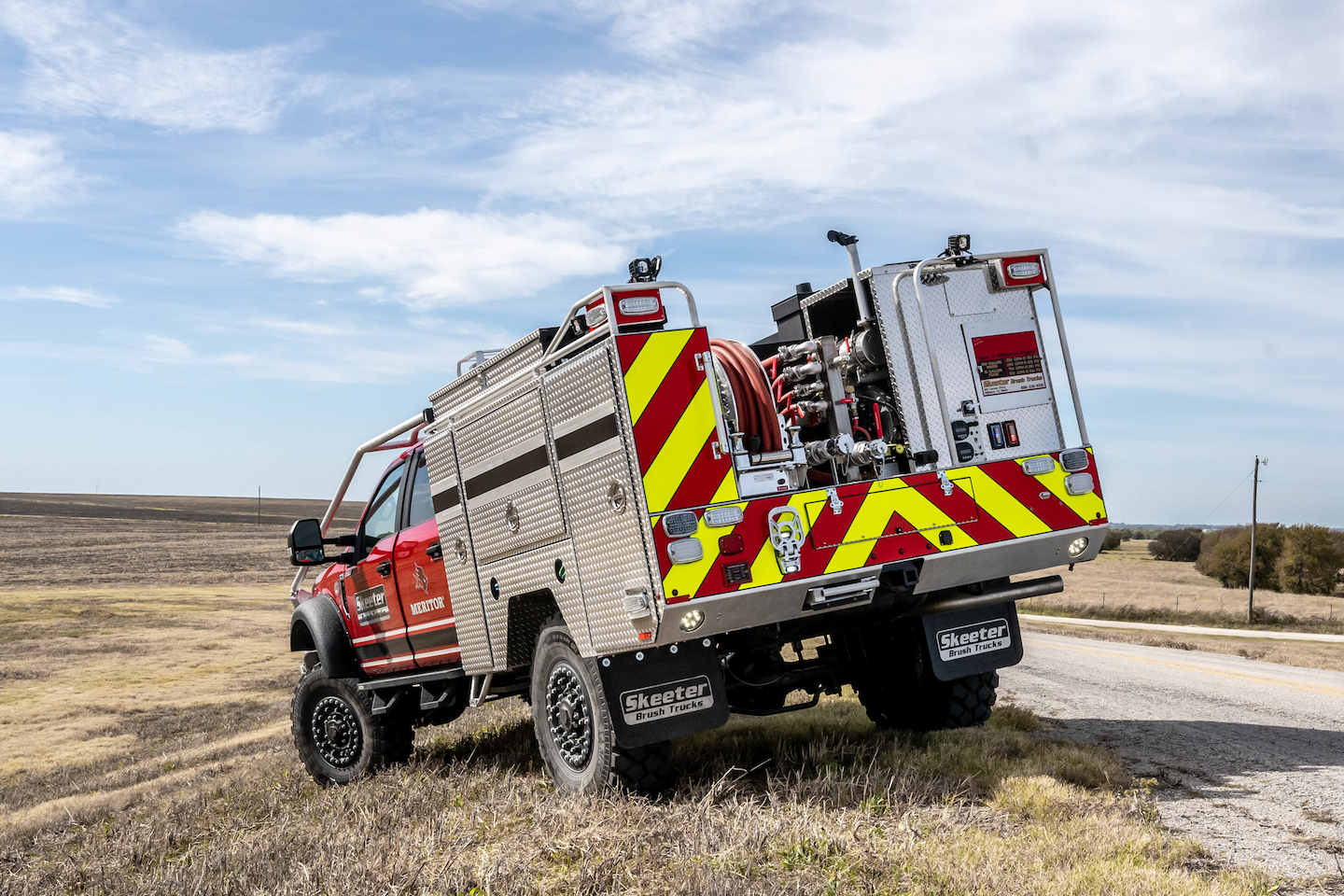 Skeeter’s goal is to build a vehicle to meet firefighting Type 3 standards (usually a Class 6-7 truck) based on a Class 5 pickup that could “go places that those big trucks could only dream of going.”

“I’m all for them: In 31 years of emergency service I’ve seen a lot of issues where the adrenaline of a big fire or big emergency incident can get to a driver; and he’s pushing the truck a little hard,” he said. “But you can’t take away from the performance of the truck.” October 14, 2019
Corbin Strong
Bills Blog
No Comments
Large scale evacuation of people in both metropolitan and rural areas during a major flood event can prove to be more than difficult. Evacuating a subdivision is one thing but…
Read More September 11, 2019
William Davidson
Bills Blog
No Comments
The need for fire departments to purchase wildland fire apparatus is greater than ever in todays world. More intense droughts, more housing and business in the wildland interface area, and…
Read More October 14, 2019
No Comments
Large scale evacuation of people in both metropolitan and rural areas during a major flood event can prove to be… September 11, 2019
No Comments
The need for fire departments to purchase wildland fire apparatus is greater than ever in todays world. More intense droughts,…
Menu